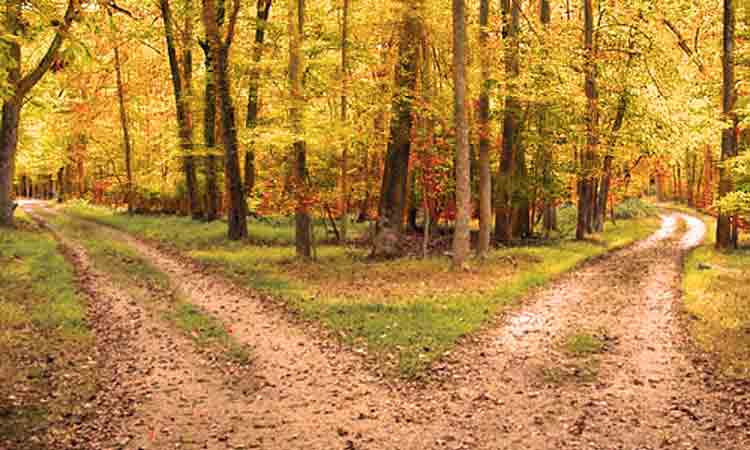 Robert Frost’s words have driven me to distraction for as long as I can remember: “Two roads diverged in a wood. And I – I took the one less travelled by and that made all the difference.”

When I come to a roadblock, an important decision or a crossroad, I try to make the right choice … the “one less travelled by.” I try and filter my choices through the lens of “what’s popular” or “what’s right.”

Unfortunately, life’s not like fiction; and choosing a road isn’t as clear cut as it’s made out to be. In fiction there’s  a choice between good and evil, hero and coward, honest or dishonest, this allegiance or that allegiance and so on.

In real life (well for me anyway) you get to choose between two bad choices or two good choices. A “lesser of two evils” deal.

You know the ones. “Should I meet that client and secure a lucrative deal (that’ll set our family up for the next two years) and miss my daughter’s birthday party (and, live with her disappointment for life)?” “Should I tell him his speech stank (risking his ire and probable loss of his friendship) or should I keep quiet and let him keep feeding this disaster to more audiences (risking him being embarrassed in public every time he opens his mouth)?”

I, of course complicate things and try and take both roads. That’s when I come unstuck.

My favourite choice is like a cosmic joke. I choose the roads of lunacy and insanity. Well, actually, I choose lunacy first and then insanity follows.

Sometimes I can be a lunatic. I can be stupid and behave badly and get up to absurd mischief that comes to bite me in the rear sooner or later. And then I end up with chronic remorse and follow the road of insanity by obsessing about the lunacy of my past. I go into chronic remorse.

The problem with this strategy is that it is like rolling in the dirt and thinking you’re going to get clean. Absurd, if you ask me.

I like Aldous Huxley’s take on messing up: “If you have behaved badly, repent, make what amends you can and address yourself to the task of behaving better next time.”

This works for me. You don’t get stuck in the past. Which is a sure-fire recipe to stop you making the most of your present and can scupper your future.

So, as you get to travel through this human endeavour, you’ll  always have choices. Some easy roads and some difficult roads.

Both are instructive to you. But, the choice you make will reveal your character. “The road less travelled by,” is always the harder one, but the one that makes all the difference.