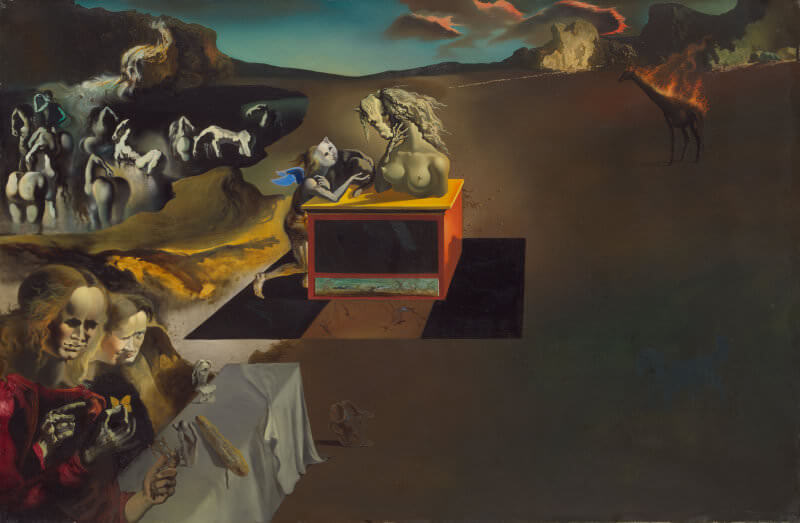 Inventions of the Monsters, 1937 – Salvador Dali

It appears that last Saturday’s newsletter, Days. Weeks. Months. Who Knows? was well received with a 50% open rate and 726 clicks to all the resources I put in it. I’m delighted that there are still people in this world who can engage with text longer than a paragraph and it has encouraged me to write today’s one.

As you already know, the President of the African National Congress, Mr. Cyril Ramaphosa, announced that we’d be extending the lockdown by 14 days until the end of April.

I don’t know about you, but I was devastated and burst into tears. I don’t know which of the 7 emotional stages of lockdown I was in.

And, I’ve got it easy. I’m staying with two dear friends in Noordhoek, Western Cape. We live in a rambling house with a heavenly view. There’s food in my belly. I have Internet. I have more books than I can read in two lifetimes. I have Netflix. I have friends I can talk to. Today I had hot cross buns and Easter eggs. I heard that a good friend of mine has been declared cancer-free after a harrowing year of treatment (she must think this is all a bit meh after what she’s been through).

Once my pity party was over I went to one of the seminal works that has been a close companion, a source of reason for many years and has been the architect behind all my writing … Joseph Campbell’s, The Hero With A Thousand Faces (The Joseph Campbell Foundation).

It occurred to me that the lockdown news put me squarely in step 10 of 12 in the Hero’s Journey; the most intense part … The Supreme Ordeal: Approaching the innermost cave. It is where I have to face my shadow and my deepest fear which in my case is, “Am I up to this task? Can I vasbyt? Will my values, my beliefs and mental frailty withstand this test? This is where the metal hits the road and puts my philosophy on trial to see if I can actually eat my own dog food and do what I preach others should do. I think that you would get that it’s different sitting on the mountain and pontificating about stuff, than actually living in the blood and guts of life. I think that some of us (speakers and trainers) will be more humble when we realise that the theory we sprout forth on stage will fail under the harsh scrutiny of reality. The reality is that it is only theory for most of us because most material we use is not lived experience and we have borrowed it from someone far more intellectually adroit than we are. But, according to Austin Kleon Steal Like An Artist, that’s ok.

When two tom cats get together, they fight. When two alphas are in the same space they fight. Many copywriters, marketers and entrepreneurs get the Hero’s Journey wrong. They think that they/their company should be the hero and save the customer from whatever pain she is battling. They want to be Batman, Superman and Mr. Incredible.

When it comes to marketing, we should be focusing on the Mentor archetype and not the Hero archetype. We need to be the Alfred to Batman, the Obi-Wan Kenobi to Luke Skywalker and the Dumbledore to Harry Potter. It is our job to support the hero (our customer) as much as we can so that when they face their shadow in the innermost cave, they will come out victorious (good beats evil and retains her soul in the process). When Batman faces his shadow, Alfred’s words echo in his mind: “Why do we fall, sir? So that we can learn to pick ourselves up.”

Remember that the hero’s main question is, “Am I up to this task?” Can I aim the missile 100% so that I can destroy the Death Star? Can I stay strong for my employees and family in Covid-19? Will I survive this catastrophe? Will my relationship withstand this forced imprisonment?

You see, heroes are flawed, uncertain and full of trepidation. It is the mentor’s job to help them navigate the trials that they face so that they can come out victorious. Be a mentor and not a hero … if you want to enrol more fans to your cause. It is your job to disappear so that your customer can appear and be significant. If you get that right, you’ll do just fine when we get out of this mess.

By the way, I’ve read The Hero With A Thousand Faces many times over. It’s a dense read and can take half a year if you really study it well. Don’t read it unless you’re interested in comparative mythology and psychology. If I may suggest, rather read The Hero’s Guidebook: Creating Your Own Hero’s Journey by Zachary Hamby. It’s written for children, but it is a brilliant synopsis of how to live the hero’s life and how to traverse this path elegantly and eloquently. It will also teach you how to write well in terms of developing any story. And, of course, let your kids read it.

I was sent this YouTube video on Whatsapp (hat tip to Steve Johnson) about Antoinette Pienaar who lives in the Great Karoo. It’s called Secret to Life. If you listen to her, I think she really can help you navigate this thing that has befallen all of us. It’s in Afrikaans. But an Afrikaans you’ve never heard before … evocative, emotional and heart-rending. It is the most enchanting video you’ll see in a long time. I promise you, you’ll send me an email afterwards and thank me.

I was watching a webinar by Stef du Plessis and he showed a photo of 5ft tall Kate Nesbitt, the first woman in the Royal Navy to be awarded the Military Cross after tending to a soldier under Taliban fire.

Kate, a medical assistant serving as an Able Seaman with the Royal Navy, raced 70 yards to the stricken soldier’s side as he nearly choked to death from a gunshot wound to the mouth. She cut open a temporary airway and treated him for 45 minutes as rockets whizzed overhead and bullets thudded into the ground nearby.

‘I promised my friends and comrades I’d be their medic I promised I’d be there if they ever needed me. They needed me that day – so when the call came, that’s just what I did.’

Be like Kate and just do what you say you’re going to do. Read the full story.

Whilst we are on things military …

My friend and speaker, Stef du Plessis has been a closed book when it comes to his military career. He hasn’t spoken about it, except in passing. Until now. And, since it is now on record on his website (watch the video), I suppose I can mention it here too. It’s compelling and the lessons he imparts can help leaders help their teams navigate these fearsome times. If memory serves, Stef was the last (or one of the last) commanders (Lieutenant Colonel) involved in the last nine days of the war in South West Africa (now, Namibia) … (what was supposedly peacetime). Some of the most vicious fighting happened in this time. Stef was there. Peter Stiff wrote about it.

Although I was in the infantry from 1982 – 1982, I wasn’t a real soldier like Stef. The most danger I was in was dying of boredom. But I do know real soldiers. Like my brother, Christopher, who carried a wounded comrade out of Angola into South Africa. He ran for 10 nights and hid for 10 days to evade capture from FAPLA on his way home. My cousin Louis who was a major in 32 Battalion (and, resigned a Colonel). My cousin Dolf, also a Colonel. My friend, Callie Roos who was a special operator and today, amongst other things, is involved with the South African Special Forces Association. You won’t believe how many people claim to be special forces operators and aren’t. What’s wrong with them? See the wall of shame.

I salute you all for who you became after your Hero’s Journey.

I wish you well for the coming weeks. I’ll be in touch again.

[…] we will be taken seriously. But, if you read anything about the hero and the mentor in my last newsletter, you’ll know it is better to be the mentor (if you want to make money in your business or get […]

Enjoying sifting through your archives – this is a great edition Jacques. All of them are great but this one is solemn and uplifting at the same time. We are all evolving through lockdown – and we will come through this. Thanks for so generously sharing your thoughts!