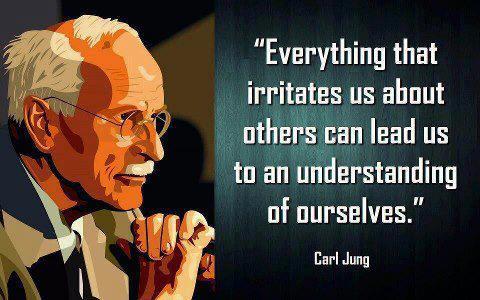 I find people irritating. Not everyone, you understand. Just some of them.

You know the ones.

Those that say they’re going to do something and don’t.

They drive me to absolute distraction and to be honest, loathing.

Of course, you know the real truth of the matter, don’t you?

These traits that I so abhor in other people are exactly the ones that I carry.

“Everything that irritates us about others can lead us to an understanding of ourselves.” – Carl Jung

Jung’s right, of course. All I’m doing is projecting my own issues onto these people.

So, whenever I feel judgemental towards others, I take a moment to pause and ask myself “where are these feelings coming from?”

And, when I pause, I realise that the very behaviours that the other person is doing is exactly the one that I’m doing too.

So, what’s really happening is that I’m getting irritated with myself because I feel that I’m falling short of the standards I have set myself.

It’s, of course, easy to point fingers at others so as to deflect the attention off me.

The reverse is also true. When people look at me in irritation nine times out of 10 I know they’re irritated with themselves too. Because they see something in me that they don’t like because it sits in them too.

So, when the ‘Lady doth protest too much’, don’t rise to the bait. Before you respond to the person, try and figure out what it is that is really bugging them so that you can diffuse added tension.

But, living in a state of constant irritation is also not a healthy state-of-affairs. So figure out what it is about others that irritate you and if it is you projecting your own inadequacies, then do something about it.

So, in my case I would have to keep my word, start claiming my magnificence, stop stuffing my face and exercise more and talk less and write more.

But, not everything is projection. Sometimes our behaviour is unacceptable and we need to own that it is. As Sigmund Freud said, “Sometimes a cigar is just a cigar”. So, men, when you leave the toilet seat up there’s no projection issues from your significant other. She’s right, you’re just an inconsiderate lout that needs to take cognisance of other people’s needs and feelings.