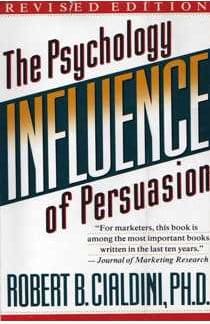 As a student I used to sell jewellery at various country shows like the Rand Show, Pretoria Show, Pineapple Festival, East London and the like. There was no sales training. It was intuition, gut feel and a lot of seat of your pants, think on your feet confidence that helped me sell.

I’ve always been fascinated as to how one can interrupt someone who is walking down an aisle. Get their attention. And, five minutes later, they’re walking off with a piece of jewellery that they never in a million years thought of purchasing.

For those in the sales profession, you will understand what a rush it is to be able to persuade and influence someone to you way of thinking. Cialdini’s book, INFLUENCE – The Psychology of Persuasion (let’s call it Influence from here on in, ok) gave me the science behind the intuitive gut feel, seat of your pants selling I was attempting at all the shows I attended.

When I picked up Influence in the 90s I didn’t know at the time that this book would be the start of my quest how the mind works in the buying process. Influence started my love affair with neuroscience.

I think that Influence should be required reading for every marketer, sales training facilitator and sales professional who want’s to understand how and why we buy.

After reading Influence you’ll understand why people buy at an emotional, visceral level and not at a logical level. Just that insight will fundamentally change the way you sell in future.

You’ll find quirky titbits that if you think about them, you can find out how to use them in your sales and marketing arsenal. Like:

The nub of the book is its six psychological secrets (just by saying ‘secret’ creates mystery – something the curious human psyche can’t resist). You’ll find out how to use them and how to defend against them. As the blurb on the back cover says: “You’ll never again say “yes” when you really mean “no,” and you’ll make yourself more influential than ever before.”

You’ll learn about the cunning of commitment and consistency, the power of reciprocation and the seductiveness of social proof. If you want to find out what the other three secrets are, go get Influence. You won’t be sorry.

[…] has been studying neuroscience and how it can be applied in sales and marketing since reading INFLUENCE – The Psychology of Persuasion by Robert B. Cialdini, Ph.d in 1998. He was absolutely fascinated by some of the neuroscience […]