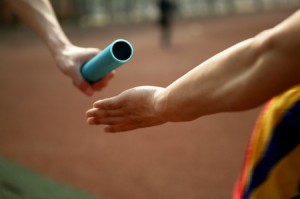 I have consistently argued that in the course of establishing a legitimate relationship based on Care and Growth of the subordinate, the leader has to continuously review the level of control in the relationship. The degree of control in a relationship has to be appropriate to the maturity of a subordinate (a contention which is at the basis of the Situational Leadership argument). Since growth itself is an incremental process, the control that is exercised over a subordinate will only be appropriate if is continuously reviewed.

This criterion seems obvious when one is looking at the matter from the point of view of the individual. It is, in a sense, self evident that people become more capable over time and that they could and should be entrusted with more. However, the criterion has a fundamentally disturbing consequence for the organisation.

The reason for this is that all organisations are, in principle, webs of control mechanisms. If one listed the things which are associated with the idea of organisation, then that would include the elements such as systems, structure, authority, hierarchy, policy and so on. Every one of these words has a control implication. If we argue that the control exercised over the individual has to be appropriate to level of the maturity of the individual, we are suggesting that the degree of control exercised should be subordinate to the maturity of individuals. In this sense, the organisation is therefore subordinate to the individual, not the other way around.

Firstly, it is quite difficult to avoid the mentality of the victim among employees. When the organisation exists as a superordinate reality to the individuals it becomes a prison that robs people of their autonomy and individual accountability. Their day to day reality is one which is regulated from without, by the organisational world out there, rather than by their own conscience and will. Consequently they start to loose their will, their oomf, so to speak.

Secondly, there is a necessary entrenchment of mediocrity that follows. Because the organisation necessarily has to work with averages it becomes somewhat hostile to individual flair in principle. One often hears the comment that production workers might be a very capable people in their private life, but when they arrive at work they are required to leave their minds at the gate. This is frequently exacerbated by how the organisation deals with non-compliance. When someone steps over the line the immediate response is to institute another control to ensure that the particular problem does not arise again, rather that holding the person concerned accountable. The effect of this is to reduce everyone to function at the level of the lowest common denominator.

The basic model is that an organisation is a frozen, crystalline thing that has to be de-frozen and brutalised and then refrozen into a more sensible form. The problem with this is that the moment that the consultants leave the rot starts to set in again, sowing the seeds for a further, equally traumatic business re-engineering exercise later.