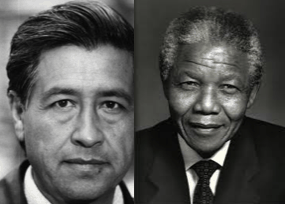 Helen Chaves, the widow of Cesar Chaves, civil rights activist, wrote this on the day of his death on April 30, 1993. This letter may as well have been about our own Nelson Mandela’s journey. The similarities and plea, sent chills down my spine. Our government should take the word ‘entrusted’ in the 2nd last paragraph to heart.

I buried my husband this afternoon.

Yesterday, thousands of us walked in funeral procession through Delano, the same little town where so many years ago it was only Cesar, only Cesar and a faithful few walking door to door with a dream.

I never stopped being amazed by Cesar. Somehow, from those first lonely days in Delano, he managed to plant his dream into many, many caring hearts. He was the kind cultivator, the compassionate sower, the gentle field worker, working in rocky soil where few believed justice could ever bear fruit.

I suppose I was the toughest one to organise. With eight children and only a beat up ’53 Mercury wagon, I wondered how far a dream could take us. But, with Cesar, if something was not worth giving your life to, it was not worth doing. And in the end, he gave his last ounce of life for his beloved cause.

People say Cesar is with God now, but to me Cesar has always walked with God. He led us from fields of sorrow to the edge of the Promised Land.

I know that, truly, Cesar would not have left us without knowing that one day, working together, we will reap a safe and just harvest.

The work of the Union has now been given to farm workers who first learned from Cesar that their voice could command change. This work has been passed on to our many friends who helped build our Union with unyielding generosity. And it has been entrusted to the Union’s leadership who worked daily with Cesar and learned that action and commitment are the ultimate signs of love.

I ask you now, as we begin to look forward, to continue to help sow and harvest the dream that has brought us together. It is what Cesar wanted for the Union.