In my previous article I argued that that the pursuit of legitimacy in organisations requires that leaders are held accountable for the care and growth of their subordinates. One of the implications of this is that the control which is exercised over people is continuously reviewed and stretched in order to accommodate their growth. The implication of this is profound because it suggests an ongoing devolution of authority in the organisation in two senses.

Firstly, there is the ongoing handing down of authority from the top to the bottom of the hierarchy. We refer to this as “vertical empowerment”. If one assumes that at every level of the organisation leaders are continuously considering what authority they can hand down to their immediate subordinates, there are two necessary consequences: The hierarchy naturally flattens and more and more significant decisions are being made lower down in the organisation.

Secondly, there is the continual review of the controls exercised by staff functions. The aim in this regard is to shift more and more accountability for things that are traditionally done by staff functions into the line. We refer to this as “horizontal empowerment”. The effect of this is, over time, to break down staff empires and to create the conditions where staff functions act as custodians of excellence that perform a consulting role to the rest of the organisation.

Both horizontal and vertical empowerment approach the problem of simplifying controls from the point of view of structure, and the overall effect of these two processes is to establish lean and flat organisations. However, the other approach to reviewing controls looks at the problem of control from the point of view of system. This suggests that people continuously do the equivalent of what consultants refer to as “brown paper” exercises.

A brown paper exercise has two elements to it. Firstly, it is about documenting any given work process in a flow diagram. Secondly, there is a review of the steps of the process in view of cutting out unnecessary steps or simplifying the process. This really amounts to having less control points in the execution of the task, which generally has the effect of establishing greater accountability with line groups further down the organization. 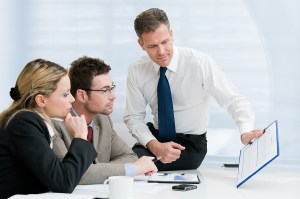 These incremental shifts have to be done in view of the degree of risk covered by each control.  It clearly does not make sense to remove high risk controls at the outset of the process. In order to establish the order in which controls should be removed it is necessary to rank them from the controls that have the smallest risk associate with them to the controls that have the greatest risk. If one approaches this matter from the point of view of structure it means that the leader would commence with entrusting those controls to his subordinate that have the lowest risk associated with them. When one deals with this from the point of view of system, it suggests that the order in which steps in the system are removed is not dictated by the sequencing of the tasks in the process, but by the degree of risk associated with every task.

In any review of controls it often becomes apparent that there are certain controls which do not add any value whatsoever. These are often controls that amount to a control of a control. Controls of this kind may be suspended forthwith precisely because there is no risk associated with them. However, in dealing with controls that have risks associated with them it important not just to remove these incrementally, but also to be quite clear with regard to the means and the ability requirements associated with each one of these controls.

Lets say, for argument’s sake, that a supervisor in a manufacturing concern had absolutely nothing to do with decisions regarding the leave of his subordinates, and that it is decided that he should have the authority to schedule the leave of his people. It is firstly necessary to consider what the ability requirements are associated with this task. What, for example, are the minimum staffing requirements on the plant? What are the policy requirements associated with leave? How does the leave register actually work?

This training of the supervisor should not just focus on how to do the task, it should also focus on why the task should be done. By this we understand that the person is made aware of the consequence of not complying to the standard stipulate for the given task. It is also necessary to point out the accountability consequences for the supervisor should he not perform the task to standard.

Further to this it is necessary to consider the means which have to be provided to the supervisor to enable him acquit himself of the task. Is the leave register accessible to him? All of these are necessary preconditions that have to be met before the person may be held accountable for doing the job. This suggests the following 5 step process with regard to the removal of a particular control:

Of all of these steps the most significant is the last, namely holding people accountable. What normally happens in organisations is equivalent to the following:

Control and accountability are mutually exclusive conditions. You cannot have your cake and eat it. If you do not hold people accountable for what they have been entrusted with then the only other alternative is to impose a control. The advantage of continuously removing controls is that the organisation by definition becomes more and more able to respond over time. The nature of control is to waste value. They function like the brake in a car. Every time you apply the brake you by definition waste energy that has already been put into the system. If the key issue is efficiency, one therefore has to be very circumspect with regard to the controls which one allows in the organisation. Every control that is exercised come at the price of introducing inertia and friction into the system.