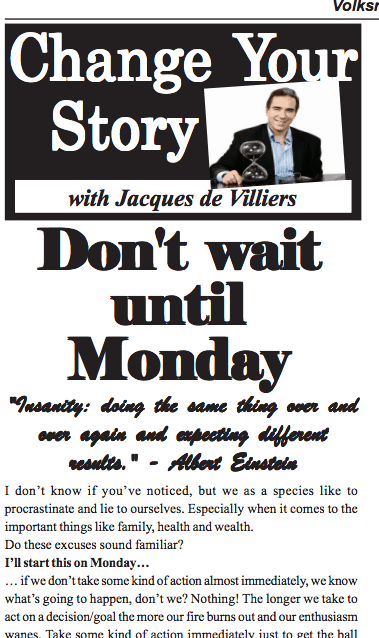 I don’t know if you’ve noticed, but we as a species like to procrastinate and lie to ourselves. Especially when it comes to the important things like family, health and wealth.

Do these three excuses sound familiar?

I’ll start this on Monday…

… if we don’t take some kind of action almost immediately, we know what’s going to happen, don’t we? Nothing! The longer we take to act on a decision/goal the more our fire burns out and our enthusiasm wanes. Take some kind of action immediately just to get the ball rolling. As you know, it’s hard to get the ball rolling, but once you do, it is easier to keep it in motion.

… if you use “I don’t have time” as an excuse, grow up! Nobody has time but we will all make time if it is important enough. If you don’t believe me, think what you would do in this situation … you win an all-expenses paid trip to Disneyland for you and the family for a week. Do you think you’re not suddenly going to have time? Don’t ever make the excuse of no time, rather be honest and just say that it is not important enough for you to stop doing what you are doing.

… doing something 100% is even more mythical than the Easter Bunny. Can you imagine if you said to yourself when you were crawling around your parent’s house as a baby, “I’m not going to walk unless I can do it 100%”. Nothing’s ever 100% – we learn, we make mistakes, we stumble and we fall. But, if we consistently try something, we could really succeed at something worthwhile.

Why do you think we procrastinate? The harsh truth is that we procrastinate because we really don’t want to do the thing we say
we want to. If it was fun and meaningful, we would start it in a heartbeat, wouldn’t we?

I remember getting really upset with a friend of mine when I mentioned that I would like to go on holiday to Spain. He said, “No you don’t”. I said, “Yes I do”. He said, “Seriously, if you really wanted to be in Spain you’d stop talking about it and you would
already be there”. It’s five years later and I still haven’t been to Spain. So, maybe I just don’t want to go because it is just not that important to me.

So, don’t wait until Monday or next month to tackle your goals.

Take some kind of action immediately and, maybe, just maybe, you’ll be able to change your story.

The original article appeared in the Volksrust Recorder – 17 October 2014. Check it out NewVolrec00p004