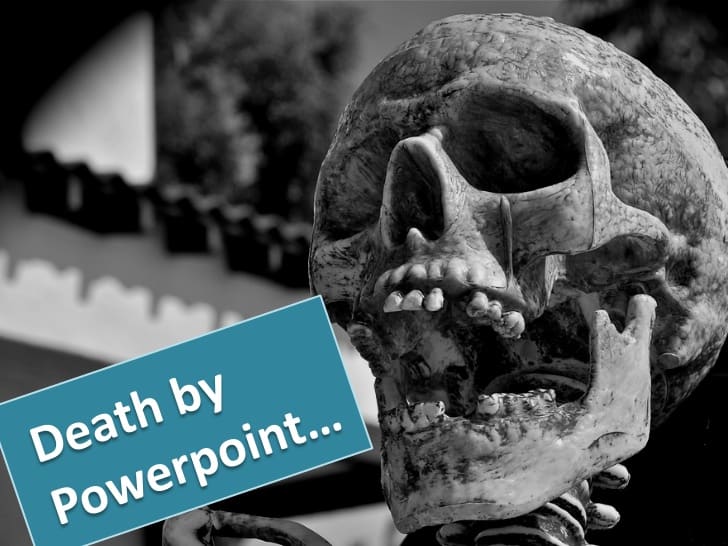 Sometimes it’s not the smoking that you miss. It’s the act of playing with the cigarette.

In the previous two articles*, I militated against the audience-genocide visited upon humanity by PowerPoint slides. But what if, like the quitting smoker, you need something else to fiddle with? You see the argument for ditching slides, but you’d like an alternative or two.

I was once told about a truly ingenious pitch delivered to the a senior leadership team at BMW.

The presenter handed out a sort of ‘placemat’ to each delegate. The placemat was shaped like the BMW four-quadrant logo and had two layers, a top and a bottom, separated by a pivot through the centre. The bottom layer depicted four key words, one per quadrant, which formed the structure of his presentation. The top layer also showed the BMW logo, but only had three-quadrants, with one cut out to reveal the key-word beneath.

The top layer functioned like an independent wheel, which delegates could turn as the presenter progressed through his four points.

This approach flattered the organisation to which he was presenting, and showed that his talk was fully customised to them.

Novelty like this that can set you apart and make your presentations extremely memorable.

Why memorise an entire script when you can act like a politician and read it off a screen? If it worked for Obama…

Autocues perform a similar function to PowerPoint, but in a number of ways, they are superior. For instance, you get access to your full script without your audience seeing even key words, as they would with slides. To all appearances, you are simply speaking naturally, not referring to notes at all, and your wording is perfect.

There are apps available for tablets which can perform the function. Some, like the Teleprompt for iPad, are sophisticated enough to display your text while also recording a video of you presenting. You could then use the video as a form of value-add for the delegates, providing it to them in place of notes afterwards.

2. Carry out a display

Like to create a little drama? Use a prop that does something. Display a reactive agent that goes through a process.

By way of a few examples, you could mix different colours of dyed water, melt something so that it drips, pours and runs, heat up kernels until they pop into popcorn, break something, burn something… anything that changes visually.

Displays are powerful. They take the hypothetical and make them real for that audience.

I recall an episode of the television show, ‘Airport 24/: Miami,’ in which the head of safety for an airport took his staff out to an open field and detonated an actual shoe-bomb in front of them. Their facial expressions, upon seeing the devastation, were priceless. He simply concluded with the line, ‘Any questions why our passengers should take their shoes off?’

The best presentations are not about facts, but ‘impact.’

Actually, this humble technique can bring a unique vibrancy to your presentations. The advantage of a flip-chart lies in the psychological effect of ‘sleeves-rolled-up’ live creation. When we think of people writing on flip-charts, we think of high-energy meetings in top level boardrooms, as important executives hash out real-world stuff, late into the night. We think of no-nonsense brainstorms and group input. There is a certain raw energy to a flip-chart. A certain getting down to businessquality.

And it is the act of live creation that makes it compelling. You’ve probably seen an artist drawing portraits or caricatures in a busy shopping area. Note the number of people who stop and stare. These same people might not have stopped to stare at the completed drawing. That is the power of live creation.

4. Use implication to create imaginary props

Curiously, you don’t actually need to have a physical prop in order to use a prop. You can create the impression of a prop. You can use nothing but fresh air, and pretend it’s a prop, and it will still work.

Say, for instance, you are telling a story involving a car. You would ‘place’ your imaginary car in a certain spot on the stage. And just by indicating its lines with your hands, you will conjure up imagery in the audience’s minds. You don’t even need to say, “Imagine a car here.” You simply gesture toward it, as though it were there. Their minds will do the rest, by means of a process called ‘co-opting enthymemes.’ (Watch me use this technique in front of a live audience live here:https://youtu.be/_zk5Em5oY_M. Feel free to comment upon the irony of the slides in the background).

If you simply go about it confidently, the audience will not even question the use of an imaginary prop.

5. Use the audience to demonstrate percentages

The audience itself can be a visual aid. After all, why should they sit there comfortably while you do all the work?

Not only does a ready-made crowd make a wonderful way to illustrate population percentages, for example, but the very act of involving them brings them into your presentation and creates heightened interest.

“Folks, could I ask the first ten rows from the left to stand up? Please look around you. If this group represented the entire human population, that’s how many people suffer from webbed toes. Truly gross! Thanks, websters, you may take your seats.”

It’s much more vivid to show percentages using actual groups of people than it is to stick a pie-graph up on a PowerPoint slide, or simply say ’20 per cent of people.’

An incomplete hand-out creates an air of expectation when received and involvement as you go along.

There are a number of ways that you can go about using the incomplete hand-out. They can either fill in text, as you give key words or phrases, or they can draw something. Or a combination of both. If you’re feeling creative, you can even do a variation on the game ‘Bingo!’

The level of complexity of your incomplete handout can range from a pamphlet-sized sheet, with three or four missing keywords, right up to a full-scale manual, which your delegates use to follow along during a multiple-day bootcamp.

7. Get them to visually quantify their pain

I once consulted on an interesting project. A company that sold training programs to a bank had been given an opportunity to speak at an event, before a gathering of potential customers.

Their goal, as we determined it, was to prove, and emotionalise, the fact that the real competitive advantage in this market boiled down to one thing and one thing only: the skill of their staff.

Our speaker then handed out a single page to everyone in the audience. On the page was a diagram of a human form, divided into levels from top to bottom. Along with their page, each person received three coloured crayons. Our speaker then asked them to think of one of their typical employees; any one that sprang to mind.

“Keep that employee in mind,” he said, “And let’s use that person as a reference point.” He had identified 6 key attributes that such an employee, in such an industry, must have, and the amount of money it can cost that company per missing attribute, if those skills are missing.

As he listed them from the stage, the delegates get to colour in a section of their diagram if their person had that quality. They used the red crayon if the person was very strong in that area, grey if they were merely competent, black if they lacked the skills entirely.

Our speaker then said, “Take a look at your black and grey areas. Now let me tell you how much they are probably costing you.”

He then went through each of the 6 key attributes again, explaining the financial damage such a gap could cause, in numbers, in the average bank.

The genius in this illustration lay in getting delegates to visually quantify their own pain. They could see how badly they needed the solution. And putting numbers to it added immense impact too.

The ideas in this article are taken from an audio seminar titled ’50 Ways to Make Your Point Without PowerPoint.’ Penguin Random House will be publishing it as a book in the near future, at which point it will go about ending suffering in the corporate arena and ultimately win the Noble Peace Prize.

[author] [author_image timthumb=’on’]https://www.jacquesdevilliers.co.za/wp-content/uploads/2015/08/Screen-Shot-2015-08-18-at-12.49.54-AM.png[/author_image] [author_info]Douglas Kruger is a full-time professional speaker and 5 x winner of the SA Championships for Public Speaking. He has trained and coached senior managers for brands like BMW, Mini, FNB, Liberty and more.[/author_info] [/author]