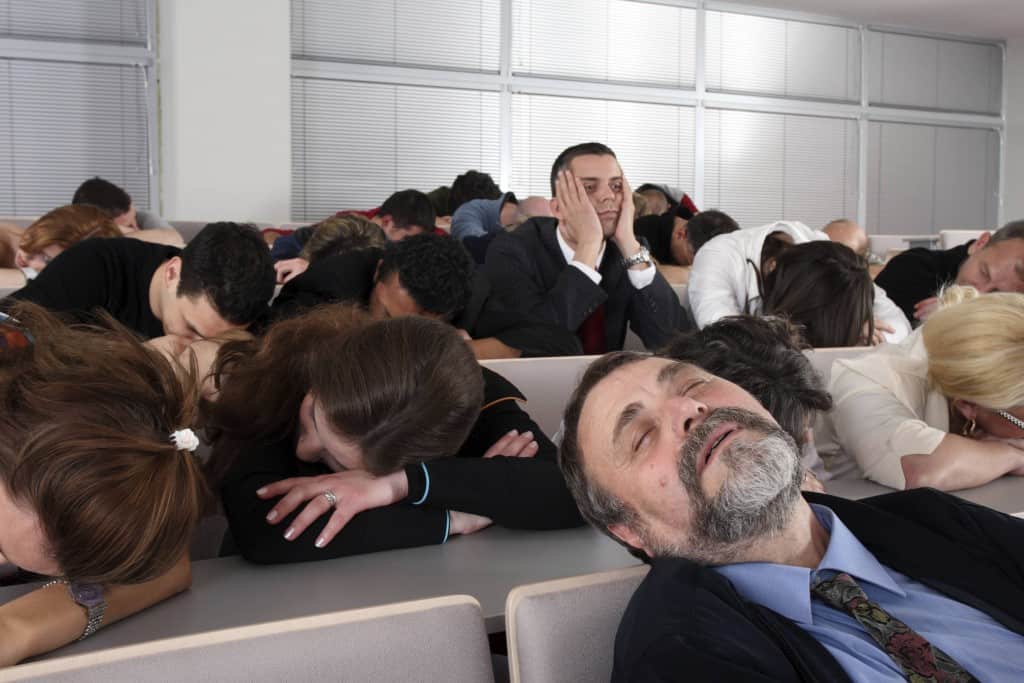 Part 2: 10 Presentation Structures that Replace the Need for Slides

In the previous article, we used scientific methodology to establish that PowerPoint now outnumbers homo sapiens, has become sentient and self-perpetuating, and will soon rise up and trigger the Apocalypse. Happily, there are alternatives.

If you’re brave enough to present without slides (and here are 7 reasons why you should: there are useful structures available to relieve you of the need for them. These structures are designed to keep you on track and make you look professional.

IT’S NOT ABOUT THE FACTS. IT’S ABOUT THE MESSAGE.

There is a world of difference between Fact and Message. Most truly effective presentations focus on Message. Most bad ones are bogged down by reams of Facts. Facts are only useful insofar as they help you to support and deliver your message. Beyond that, chuck them. Having the information is only half of your job. Making it come alive is the balance.

With that in mind, here are some options for structures that replace slides:

10 Structures to use in Place of Slides:

Simplify your message so that there is no need for a complex series of explanatory visuals. Short, sharp and powerful, just like the Gettysburg Address; a 2 minute and 45 second address which helped to determine the course of an entire nation.

Three is a magical number. For unfathomable reasons, which psychiatrists recognise but can’t fully explain, human communication is effective when grouped in three’s.

We sometimes refer to Churchill saying, “Blood, sweat and tears.” In reality, he said, “I have nothing to offer my country but blood, sweat, toil and tears.” That’s a set of four. History, however, has decided that three is better, and ‘corrected’ his phrase.

Sets of threes work very well in multiple applications. It can be three main points, three illustrating stories, or three quick examples. It could be three repetitive phrases, like:

Using the Rule of Three is not only elegant, but it simplifies the quantity of information you are required to remember. If you remember three major points, or three major stories, you remember your entire presentation.

3. Use a problem/solution structure

A great many good ideas are shot down in their infancy because they are proposed without sufficient context. Generally, it’s down to a simple mistake: attempting to sell a solution, without first properly selling the magnitude, or cost, of the problem.

Using the Problem/Solution structure heightens our persuasiveness. If we sufficiently emotionalise (or sell) the problem, we illicit greater buy-in to the solution. Contextualise, emotionalise, sell. This structure is simple to remember and has a logical flow that negates the necessity of slides.

A time-honoured adage for speakers asserts that: ‘Stories are the medium of human communication.’

There is nothing more powerful than a story to communicate an idea. Stories help you to look less preachy and less prescriptive, because they make the point without you having to belabour it. The point is intrinsic to the story. They make your point effectively, but diminish the authoritarian ‘Because I say so’ impression.

Stories are really the antithesis of PowerPoint. Where bullet-points, lists and graphs invite an audience to switch off – giving the cue: “Here comes the technical gumpf” – stories do the opposite, awakening the creative side of the mind with the cue: “This is real and interesting. This is how it happened to these guys, and it could happen to you.”

Stories require the audience to participate by using their own mental juices. They compel the construction of internal mental imagery, characters, ideas and ideals according to what you are saying, and the more vivid and interesting your storytelling technique, the greater the total number of neurons you will trigger to fire in their minds.

PSA is an easy formulaic structure to remember. It stands for:

A variation on the ‘Tell Stories’ structure, this approach works in almost any presenting scenario. Tell your story, make your point, then explain to the audience how they can use your thought, idea or proposal in their world. In other words, after telling the story and making the point, you show them very clearly what to do about it.

You can also shake it up by changing the order. Open with the Story that leads up to the Point, then provide the Application.

A good metaphor not only gives you storytelling opportunity, but provides a little verbal capsule by which audience members can reproduce your idea for others, ala ‘He spoke about whether you blame the jeans or own the bum.’ Neat and snappy. It’s much more clunky to explain, “He spoke about how we allow ourselves to think like victims and how we should be more proactive.’

A metaphor neatly sums up the gist of the thing in a pithy way. For this reason, there has been an explosion of catchy metaphors in the sphere of business writing. Think: ‘Who Moved My Cheese?’, ‘How Stella Saved the Farm,’ and ‘Our Iceberg is Melting.’

Metaphors are as powerful as stories, but with the additional advantage that your metaphor doesn’t actually have to be true. Just illustrative. They help you sum up complex ideas quickly and bring imaginative creativity into even the dustiest of topics.

7. Use a representative icon

An icon is a simple thing that represents a bigger idea by extrapolation. An economist who wants to explain the idea of inflation might pick on an icon like a BigMac burger, then speak about the rising cost of a BigMac over time (one small item that represents the bigger picture).

By using a simple, iconic object that everyone can relate to, you help the audience to ‘get’ what you are saying in the bigger picture. It simplifies the complex and makes it accessible. It takes a large, abstract idea and makes it specific.

8. Pose a question, then answer it

Questions are uniquely powerful. Often more so than statements. They require of an audience. They pick at the mind and stroke the imagination. They invite the audience to think, to weigh up and consider, to speculate and wonder what the answer might be. Asking and answering questions is effectively creating moments of tension and release.

As a replacement to PowerPoint, you would pose an important question, leave it hanging for a moment or two, then answer it. For instance, “What is the single most important lesson a salesperson can ever learn?” (Pause). “The answer is…positioning!”

If you know your questions, then you know the outline of your entire speech. If you still don’t feel confident, take along a page with your questions.

9. Use a repetitive ‘A’ Versus ‘B’ structure

The back and forth rhythm as you contrast two opposing qualities or ideas is intellectually attractive, and helps to draw clear delineations between how to, and how not to, or desirable and undesirable, or before and after. Any presentation in which you hope to change audience behaviours from an undesirable to a desirable will benefit from this structure.

Here is a particularly clever example of A versus B presenting, using ‘male and female brains,’ by Mark Gungor: http://www.youtube.com/watch?v=0BxckAMaTDc.

10. Co-create with your audience

This technique is agile, free-form and utterly terrifying.

Here’s how it works: As a dyed-in-the-wool expert on your subject, you step out before the audience and tell them what you can cover. Then you ask them what they’d like to hear about. Go!

It’s loose, free and fun. It is very obviously a PowerPoint-free style of presenting, because you cannot anticipate what they will want to hear. Naturally, there is an art to doing this well.

You don’t want to be so clunky as to start by saying, “What do you want to know?” That will simply look like you haven’t put in any effort. Also, go about it that way, and the audience may not volunteer questions.

The art lies in piquing interest in your topic up front, then throwing out strategic ‘hooks,’ guiding your audience toward the kind of content matter that you can cover and getting them sufficiently interested that they want to know more.

In the third and final article, I will provide a number of ideas for visuals that negate the need for slides. They are as creative as they are flattering to the audience.

[author] [author_image timthumb=’on’]https://www.jacquesdevilliers.co.za/wp-content/uploads/2015/08/Screen-Shot-2015-08-18-at-12.49.54-AM.png[/author_image] [author_info]Douglas Kruger is a full-time professional speaker and 5 x winner of the SA Championships for Public Speaking. He has trained and coached senior managers for brands like BMW, Mini, FNB, Liberty and more.[/author_info] [/author]