In a previous article, see here, I indicated that my research suggested that employees gave or withheld their commitment to an organisation on the basis of universally held criteria. These criteria were based on the degree to which management was seen to have a genuine interest in their employee’s well-being and were willing to empower or grow their subordinates.  I referred to this model as the “Care and Growth” model of leadership. In this article I would like to explore the idea of empowerment or growth a little deeper. 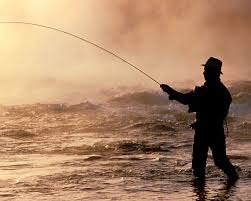 There is a very commonly held metaphor for empowerment, namely the fishing metaphor. This metaphor holds that if you give a person a fish you feed them for a day, but if you teach them to fish then you will feed them for the rest of their lives. This is more or less true, of course, but like all useful metaphors it also runs the danger of obscuring the full implications of the notion of “empowerment”. This confusion arises out of the fact that empowerment is then seen to be purely a question of knowledge or skill, something which may be taught. This implication does not stand up to the most basic and common sense examination of what empowerment must mean.

Sticking to our fishing metaphor, I have found that people generally offer two categories of things to the question of “how would you enable or empower someone to fish?”. The firstly they raise a list of things which one could call means. These are things that are not associated with either skill or knowledge. In the case of fishing these would include things such as a rod, reel, line, hooks, bait, authority to fish, a dam or fish resource and so on. The second category one could call ability. Under ability one would understand both the knowledge and skill of how to fish, as well as an understanding of why one should fish.

The problem with these two categories, though, is that they are not sufficient to make someone really committed to feeding themselves with fish that they themselves have caught. For example, assume you wish to enable someone to fish and you give them all the means as well as the ability to do what is required of them. However, imagine further that at the same time you made them aware that you have a big freezer full of fish and will quite happily give them some should they not catch any for themselves. The question here is, how willingly will this person fish.

If there were no consequences that followed on them not catching their own fish, but indeed were rewarded for not catching then it seems pretty obvious to me that such a person would not fish with great enthusiasm or commitment. This suggests that if I were serious about empowering this person then I would deliberately withhold the fish in the freezer. I would, in other words, hold them accountable for what they have been entrusted with.

This indicates that any proper and useful definition of empowerment would have three categories in it, namely those of means, ability and accountability. By accountability I would understand that there are consistent rewards and punishments that are exercised with regard to what a person has been entrusted with. If they have done what was required of them they will be rewarded, if not, then they will be censured.

In an organisational context the category of means includes things such as tools, resources, standards, time and authority. By tools one would generally understand those things which people add value with. This could include anything from a production operator’s machine to an artisan’s tools to a secretary’s computer. By resources one would understand those things which people add value on. A few examples could be the sculptor’s stone, the chef’s vegetables and the thatcher’s  grass.

By standards I understand what needs to be done,  which would include a specification of both quality and quantity. Time has two significances here,  namely that the person doing the task should be given sufficient time to do it, and that their leader should spend whatever time is required in order to provide the subordinate with the means, the ability and the accountability to do what is required of them. Finally, authority would imply that people are allowed to do what is required of them.

As far as ability is concerned the most  simple category really relates to how the task should be done. A less straightforward concern relates to the problem of why the task should be done. I have come to refer to this why as the benevolent intent of the task. The reason for this is that people are really only motivated to do a task if they see it to be meaningful. Meaningfulness is essentially about a sense of contribution. My brother Jerry frequently argues that if you took an average person, paid them three times the salary that they were getting currently but required them to sit in an empty room staring at the wall for 8 hours a day they probably would not accept the job. The reason for this is that the task is inherently meaningless. A task is only meaningful if there is a real sense of making a contribution to others in doing it.

I am therefore suggesting that the process of empowerment requires the deliberate use of three instruments, namely that of means, ability and accountability. Not to use all three of these instruments is to disable people. Further, the instrument of accountability has four strings, namely reward, recognition, censure and punishment. Not to be able to play all four strings where appropriate is equally disabling.