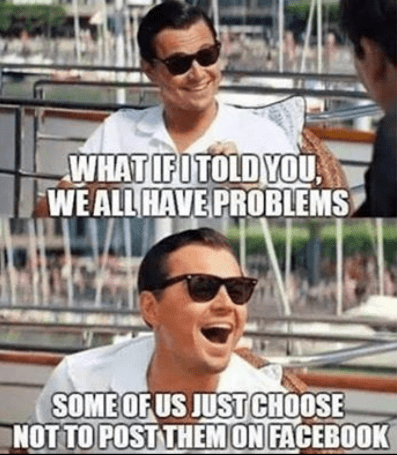 * I wrote this article for the PSASA newsletter. No motivational speakers were harmed in the writing of this article. The narcissists didn’t care and the rest didn’t read it 🙂 In essence, I’m really questioning my own ego, vanity and my need to feel significant and I’m wondering if social media is the way to go. I think not.

Is it just me or have you also noticed that as a profession, speakers tend to be like the Kardashians? We seem to place anything, be it of consequence or the mundane, onto our social media platforms. We let the public scrutinise just about every aspect of our lives. I applaud and celebrate when our profession posts about their achievements. A Radio 702 interview … awesome. You got onto TEDx … superb. Your photo was on a billboard … brilliant. But, isn’t there a limit to this “look at me” mentality?

I think that I hit my limit  when every time a speaker does a gig, it is immediately posted on Facebook.

I dunno, I can’t put my finger on it. For me it is just a bit vain and maybe even needy. I haven’t ever seen a plumber post on his Facebook wall, “Just fixed Mrs. Dlamini’s toilet.” Nor have I seen a pastor tweet, “Just buried Mrs. Smith. Lovely funeral, just lovely.” (actually, there is one pastor he does this – guess what? He’s a professional speaker). For them it’s the job they do. They get paid for it and don’t need credit for it too.
Now I might be an anachronism in this always switched on always in your face world. My narrative has been formed by coming out of a conservative family. So, maybe I just don’t get it. We were so conservative that we were only allowed to talk about those five teenage aliens who drank too much and crashed in Roswell on Mondays, Wednesdays and Saturdays (my lesson: don’t drink whilst flying a space ship at a million kilometres an hour). We weren’t allowed to discuss the Illuminati and its 13 bloodlines unless dad had at least two whiskeys in him. And, of course we weren’t allowed to blow our own trumpet because … well, that would just be ‘UnAfrican’ now wouldn’t it?

A month or so ago I sort of blew my own trumpet. I was interviewed on Cliff Central by Timothy Webster. I blogged about it and it ended up on my Facebook page (I forgot that there was a thingie on my blog that posts my stuff to Facebook). I cringed with embarrassment at my boastfulness. So, that I have trumpet blowing issues is probably an understatement. My therapist says that I’m getting better … at least I blogged about it. Yeah, what does he know? “Pass me the Ativan … I’ll take two, thanks.”

So, it’s clear that I’m not a fan of trumpet blowing. But, let’s have a bit of fun with this. Perhaps you’ll recognise yourself or some other speaker in the four personas I’ve come up with when it comes to promoting their work.

So, what is the psychology around promoting every bit of work we do for all and sundry to see? You’ll probably have to ask Justin Cohen, he’s the psychologist in this speaking family.

I get my intel from Dr. Phil. So, it might not be as well-tested as you’d like.

I think I can go with the “addicted to like” hypothesis. I do have a dirty little secret. I think I’m a fair to middling writer (did you see how I slipped in the humboast with a slice of self-deprecation? Brilliant.) and I’m like Put it out there Pete. I shove my writing down your throat every which way I can, whether you like it or not. I’ll tweet it, Facebook it, launch it on LinkedIn and even try and sneak it into this blog post.

Here’s the thing, however. When I put out a piece of work and I get three likes and no shares or comments, it cuts me. A zucchini recipe gets 17-million views, my planet-altering article gets three likes – this is like a blow to my stomach. But, every now and then when I get five likes and a share, I get a dopamine hit and I’m as giddy as a teenager in the first blush of love (yes, my standards aren’t that high). Do you also feel a bit let down when hardly anybody notices your work, or is it just me? Or do you get lots of likes, comments and shares … but you wish there were more?

You’re smart enough to know that getting validation from an outside source (that you have no control over) is a futile exercise, isn’t it? It makes you weak because it gives your power to the other. I’m totally going to bastardise an Etsko Schuitema quote when I say: “No amount of ‘likes’ can fill that hole in your chest called insecurity.”

I think that as speakers we can do a lot of good on social media. But, it’s not going to be with a “look at me” mindset. I think we’d be more helpful to our friends, family and fans by sharing our real authentic expertise with them so that we can set them up to succeed.

Oops, is that the time already? I need to get on my economy class seat (at the back) and fly to Kimberley where I’m going to speak at a small conference to 1000 amazing human beings. Bye.

Brilliant and spot on !!

Thanks for the compliment